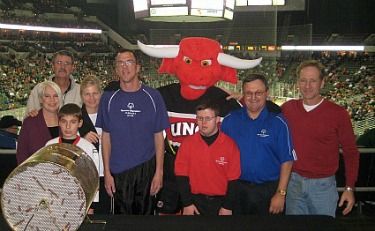 It was a great year for the annual Big Red Raffle! Special Olympics Nebraska athletes statewide raised over $120,000 for their team budgets in 2013. Thank you to everyone who purchased a ticket from an athlete - your support goes directly back to your local team and is the biggest fundraisers for many teams every year.

The winners were drawn at the UNO Mavericks vs. Minnesota State hockey game at the CenturyLink Center on December 14th.

The lucky winners were:

Congratulations to all of our raffle winners!

Our athletes worked hard to sell tickets for months. One athlete from each of our four regions was awarded a prize for most tickets sold.

The winners of the athlete selling competition were:

Thank you again to everyone who contributed to making this year's Big Red Raffle a success!