The Nebraska Law Enforcement Torch Run (LETR) involves law enforcement officers from various agencies all across the state running the Special Olympics Nebraska “Flame of Hope” throughout the state to raise money and awareness for athletes who have an intellectual disability.  The LETR precedes Summer Games, which takes place annually in May in Omaha.  During “Torch Run Week,” which is the week before Summer Games, Torch Run ceremonies are held in many communities in Nebraska.  The ceremonies consist of local law enforcement, athletes and community members running the Special Olympics torch in their communities and celebrating with athletes, families, volunteers and supporters. At the end of Torch Run Week officers gather in Omaha to run the Flame of Hope into the Opening Ceremonies of Summer Games to light the event’s torch.  This lighting of the torch represents the beginning of the Summer Games and brings joy and pride to the thousands of athletes, families, coaches and spectators who are a part of the Opening Ceremonies. 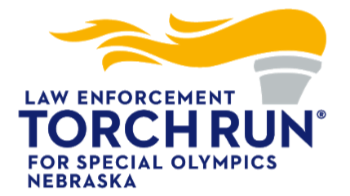