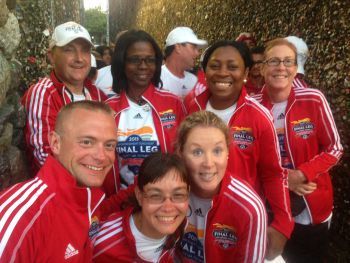 The group on our bus started the week as three different teams: 2, 8, and 10. That includes three athletes that I've mentioned before: Daniela, William, and Cody. Over the course of a few days, sharing the same bus has blurred the lines between teams and resulted in a family that we call "Route 3."

It's a truly diverse family that includes Cops who are North Dakotan, Coloradan, Connecticut...ian?, Oklahoman (don't worry, he's not a Sooner fan, we had that out on day one), Kansan (she's a KU fan but nobody's perfect), Pennsylvanian, Virginian, Californian, Mississippian, and a Hawaiian. It ALSO includes a Gibraltan, Bahamian, Austrian, Australian, Jamaican, TWO Irishmen, a Korean, a Canadian, and the first ever Icelander to take part in a World Games Torch Run.

What I'm struck by is how fast a group of cops can bond together when they have a common goal: First, support our athletes. Second, support the cause. Third, support each other.

Cops have a weird sense of humor. It's born primarily as a defense mechanism to keep emotion at arm's reach. In this way we protect ourselves from the human death and misery we are exposed to on what at times can feel like a regular basis. If someone walked onto our bus right now, they might be surprised at how we talk to each other. I'll explain it this way: want to know if cops like each other? Tell me how often they make fun of each other. If the answer is, "all the time, what's wrong with them?" Then that's a group of peace officers that cares about each other and will stick together through thick and thin.

Let me give you an example: I try and drink two gallons of water a day as part of an overall healthy lifestyle. As you might imagine, that leads to frequent restroom visits on our charter bus. That led to some of my Route 3 compatriots putting a sign on the door that says, "Tony's Room." A corresponding Facebook post followed that up, with my own wife commenting on it, "We bust him on this all the time at home, too!"

We have peace officers from several states, and as many countries, and there are two common threads that bind us together: we all have honorary doctorates in sarcasm, and we all would do anything for our athletes.

As I look around our bus I can't believe how despite our upbringings and distinct cultures we still have so many commonalities! I wish you could all meet Michaela (pronounced Mi-SHELL-a) Moloney, a copper from Ireland who literally shoved a cupcake in my face today because we thought it'd make a funny picture; Lohyun Park, a retired peace officer from Korea with a kind soul, but a rapier wit, Adi Reuter, a police officer from Austria who willing said "I'll be back," to appease his American colleagues, or my roommate Gumi, a police officer from Iceland whose speech I've read and I'll share with you after he's given it (spoiler alert, keep the tissues handy).

I've seen every single person on our bus support our three athletes. Often in little ways. A high five here, a hug there, or a pat on the shoulder for no reason but to say "I've got your back."

That reminds me of another commonality among peace officers; we're protective. We love each other and our athletes unconditionally. I shudder to think of what would happen to someone who tried to mess with one of us.

With all the problems in the world, I can't help but think that if we took all the worlds' leaders and forced them to live on a bus together for a few days, that they (and we) might be surprised to find more commonalities than we would differences, and as a result find more things that bind us together rather than separate us.

That might all be wishful thinking. What I do know is that if you turn on the opening ceremonies of the Special Olympics World Games on ESPN on July 25th you'll see cops and athletes from all over the world. Different cultures, different forms of government, different lifestyles, but all united for one purpose. If a few people in the world learn a thing or two from that, then I'll call it a win.