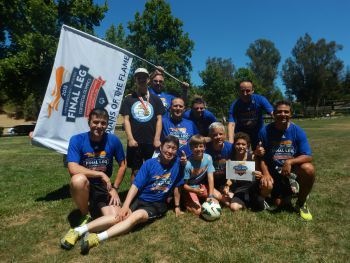 Update: the torch is heavy. I couldn't give you the actual weight of it, but it doesn't take long for it to feel like it weighs fifty pounds!

That cause? Inclusion, and the annihilation of biases against people with intellectual disabilities. The vehicle that Special Olympics uses to do that is sports.

Why sports, you might ask? I think that's best explained by one of my favorite quotes. George Sheehan, MD, a sport philosopher and author of "Running and Being" said:

"There is no better arena for evaluating your value system, no better laboratory for investigating motivation - and no better proving ground for demonstrating one's defects. Sport becomes art, language, a way of being in this world."

In this context I think George is saying that through sports, everyone (including yourself) gets to meet the real you, not the you as defined by other people's labels. Limits for an athlete can be measured, understood, and then pushed aside, setting the bar ever higher as an athlete progresses. These are tangible results; shaving half a minute off of a 10k time, throwing the shot put an inch farther, or deadlifting 10 more pounds. An athlete surpassing those limits through training and exercise, regardless of anyone else's labels, I submit to you is the art that George was speaking of. A language that can be read, heard, and understood outside of any other context.

For example, if I told you that a long jumper, after a year of training, set a personal best, you wouldn't ask any other questions. You would say "good job!" Or, "they must have worked and trained really hard." Nothing else should need to be said.

Put another way; today I shared the stage Cody Pierce, a national champion long jumper! I was honored to do so. Nothing else needs to, or should have to be said about him, except to add that he trains and works really hard to find his limits and push past them. That's the goal of every athlete, regardless of their abilities or skill level.

According to George's quote, his "status" (or that of any of the amazing athletes I've met this week) as defined by those previously mentioned labels, is and should be irrelevant. THAT is the beauty of sport! THAT is inclusiveness! In my mind, THAT is the mission of Special Olympics!