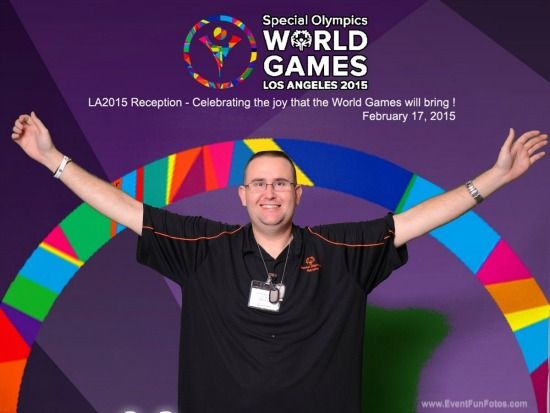 “Jason exemplifies what it means to overcome obstacles, work hard toward a goal and never give up,” said Carolyn Chamberlin, President & CEO of Special Olympics Nebraska. “Jason will be a wonderful advocate for his peers in Nebraska as well as across the globe and is a great example of leadership and the power of Special Olympics.”

“Once I found Special Olympics I felt empowered to speak up for myself and other athletes. I understand the 'inclusive aspect' as I have lived it. In school I was not always accepted for who I was. I learned differently—therefore I was different,” Jason told us. “If there is anything that is important in this world it is to have dignity and be included. I have also learned that sportsmanship is more important than winning. I have a bracelet that says, 'Difference Maker--Today is the Day--I am the One.' I want to be that Difference Maker."

Jason's mentor in his International Global Messenger journey is Scot Caldwell of Gallup. Scot will help coach Jason through his speaking engagements and travel with him to appearances.

Named for the late Sargent Shriver, Special Olympics founder Eunice Kennedy Shriver’s husband, the Special Olympics Sargent Shriver International Global Messengers program is part of the Special Olympics Athlete Leadership Programs (ALPs), which offers leadership, public speaking, and advocacy training to athletes interested in representing the organization. IGMs are an integral part of the Special Olympics organization. The IGM role is an extremely competitive and sought-after role within the organization – this year’s candidates included 73 applicants from 22 states and 39 countries around the world. They were selected based on their demonstrated interest participating as ambassadors for Special Olympics beyond sports and competition, their overall leadership skills and personal story representing Special Olympics. They will attend events in their respective regions and throughout the world, making speeches, presenting awards, and supporting the development of the athlete leadership strategy. This new class of IGMs will serve a vital role in the upcoming 2015 Special Olympics World Games in Los Angeles from July 25 – Aug. 2, participating in the Opening and Closing Ceremonies, attending and giving speeches at various events, cheering on their fellow athletes, and interacting with many of the honored guests in attendance.

“Our Special Olympics athletes are the leaders of our movement, playing important and pivotal roles throughout Special Olympics, including Board Directors, spokespersons, coaches, officials and more,” shared Janet Froetscher, CEO, Special Olympics. “I am thrilled to welcome this new class of International Global Messengers and look forward to hosting them at our headquarters in April as they prepare for this important role for our movement.”

International Global Messengers training sponsor Bank of America is also presenting sponsor of the Special Olympics Unified Relay Across America, a 46-day torch run that will visit all 50 states and bring the Flame of Hope from Athens, Greece to the 2015 World Games in Los Angeles. Bank of America is also an official partner of the 2015 Special Olympics World Games in Los Angeles.