Get to know our Brave Law Enforcement Officers! 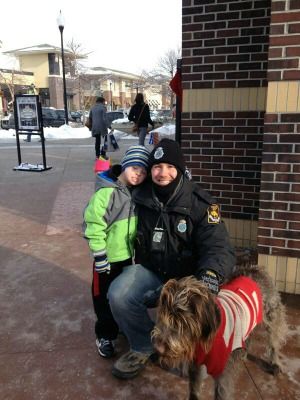 We are fortunate to have two very good sports supporting our Law Enforcement Torch Run holiday events every year! Once again, Det. Kevin Wiese of Omaha PD and Ofcr. Seth Vanhorn of Kearney PD will be facing the elements in the bitter cold to raise money and awareness for Special Olympics Nebraska. Get to know a little bit more about these two heroes below.

Detective Kevin Wiese has once-again bravely volunteered to be our officer behind bars for this year’s Cage-A-Cop event to be held December 20-22 at Village Pointe Shopping Center.

How did you first get involved with the Nebraska Law Enforcement Torch Run and Special Olympics?

At my first Torch Run, I spoke with the parent of an athlete who had just gotten out of school. The athlete needed confidence and Special Olympics changed his life. I’ve been involved for 5 years now.

What is your favorite Special Olympics event?

I like track and bowling. I volunteer at bowling events.

What are you looking forward to most in South Korea?

I’m excited for the actual Torch Run where I get to see everybody and the whole social aspect. And I love that it’s for a great cause. I don’t really know what to expect in Korea, but I’m excited to interact with people from all over the world and international athletes.

Tell us about the Final Leg run you will be participating in Korea.

We’ll be running all over the nation. I know that my team leader is from Ireland and I have a running mate who is a Korean officer.

Have you ever eaten Korean food? Is there any food you really want to try?

No – and I have no idea what to expect! I’m not afraid to try everything.

Moving on to Cage-A-Cop…this is your second year “behind bars”. What is it like spending a weekend in a cell?

It gets long and cold. I really like that I get to talk to a lot of curious people. Last year I even lost my voice! I love talking and I even sang with the carolers last year!

What do people ask you when you’re in the cell?

They want to know what I’m doing it for and I’m happy to explain that I’m supporting Special Olympics and why I do it for the athletes. They also want to know why I would stand in the cold for an entire weekend.

The annual Cop-on-Top event is going down this weekend December 20-22 in Kearney at the Wal-Mart. Cop-on-Top consists of one very brave law enforcement officer spending a weekend (day AND night) living on top of the Wal-Mart, come snow or wild geese! And the officer isn't coming down until he's collected enough donations for Special Olympics Nebraska!

This year that brave officer is Seth Vanhorn of the Kearney Police Department! This is Officer Vanhorn's 2nd year doing the Cop-on-Top. We chatted with him recently to learn what it's like living on top of a Wal-Mart for a weekend in the dead of winter.

What is your favorite Special Olympics event?
I really like bowling and track. I’ve volunteered at bowling events in the past. Of course, the Cop-on-Top is my favorite! Being up on the roof of the Wal-Mart is exciting. I like to mess with people like telling them I’ll find them the best parking spot if they make a donation. It’s fun to joke around with the customers.

This will be your second Cop-on-Top for Special Olympics Nebraska. Do you have any stories from spending a weekend living on the roof of a Wal-Mart?
A lot of times, people will doubt you’re sleeping on the roof and holler up at you. One time, a huge group of geese flew over me in the middle of the night. I thought they were going to land on me! They were 3ft. from my tent!

What was the weather like?
It was cold! It even snowed an inch or two and the visibility was poor. I couldn’t see beyond the parking lot.

How do you keep yourself busy up there?
I love talking on the megaphone. It’s fun to interact with the crowd as they come in and leave the Wal-Mart. Sometimes they’re pretty shocked to see me up on the roof!